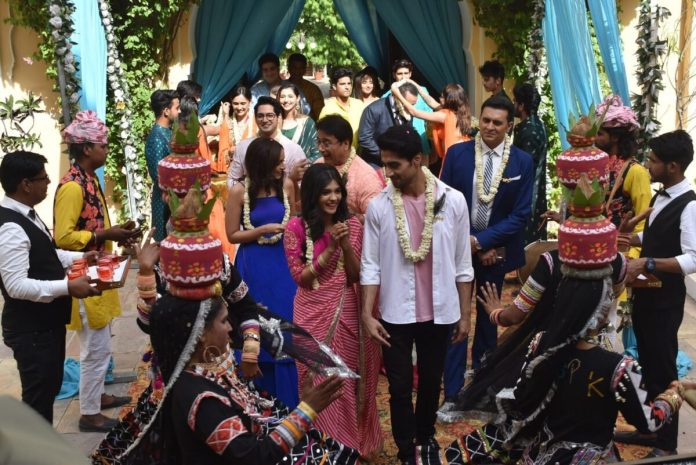 Mahima, Anand think why Anisha returned back. Parth adds he doesn’t understand why Anisha wants to marry so soon. Akshara sees family picture and recall Mahima’s accusation. Abhimanyu asks Akshara to forget whatever is going on in her mind. He asks Akshara to help her in making her birthday special. Akshara agree with Abhimanyu. Abhimanyu gets romantic with Akshara. They both feed cake to each other. Abhimanyu gives a kiss to Akshara. Abhimanyu and Akshara’s painting gets ruined in the meantime.

Abhimanyu asks Akshara to get ready fast as he is waiting for her. Akshara come. Abhimanyu’s eye gets hit by curtain. Akshara helps Abhimanyu. Abhimanyu tries to get romantic with Akshara. Kairav says to Anisha that he isn’t sure. Anisha apologize to Kairav for last night. Suhasini dislike Anisha’s return. Goenkas get together. They ask Kairav to take decision about marrying Anisha as what if she will keep running to Mumbai post marriage. Arohi dislike Anisha. She says she just can’t stand Anisha. Suhasini like Arohi is on her side. Anisha make cake for Akshara. Abhimanyu and Akshara ask Anisha not to stress. Akshara says to Anisha that Suhasini love Kairav a lot thus she worry for him. Abhimanyu divert the talk. Akshara along with Abhimanyu and Anisha enjoy the cake.

Akshara drive for Abhimanyu. She asks Abhimanyu what more surprise hold for her for the day. Abhimanyu direct Akshara. Akshara worry about Kairav. Abhimanyu asks Akshara to stay carefree for a day. Both plants a plant. Abhimanyu and Akshara decide to nurture their love like a plant. Anand accuses Mahima for not giving good upbringing to Parth and Anisha. Mahima asks Anand if kids belong to her only. Manjiri asks Anand and Mahima to stop accusing each other. Anand says Manjiri’s upbringing made Abhimanyu and Neil. Parth gives a look to Anand. Shefali says Kairav and Anisha’s topic is more important.

Akshara says to Abhimanyu that once his hand will be fine than he will get busy. Abhimanyu agree. Akshara and Abhimanyu makes a bucket list to enjoy their future together. Anisha avoids someone’s call while Birlas dine together. Goenkas pay their visit to Birla house. [Episode Ends]